Mumbai: Not a single bullet or tear gas has been fired in Kashmir, not a single person has died, since the abrogation of Article 370 on August 5, 2019, home minister Amit Shah claimed on September 1, 2019. However, this claim is belied by statements by the Jammu & Kashmir (J&K) Governor and the state police, as well as journalists’ accounts from Srinagar, including this report in fact-checking website BOOM.

Here’s a fact-check of the home minister’s claim from various sources:

Claim: “Since the abrogation of Article 370, not a single bullet or tear gas has been fired in Kashmir, not a single person has died,” Amit Shah, home minister of India, said during a rally in Maharashtra’s Solapur on September 1, 2019.

Home Minister Amit Shah in Solapur: Rahul Gandhi gave a statement that BJP didn't do any good by abrogating #Article370, he said violence is happening in Kashmir.Since abrogation of Art370,not a single bullet or tear gas has been fired in Kashmir,not a single person has died(1.9) pic.twitter.com/Nl9APYL0hF

Fact: False. Government authorities--governor of J&K and the police--have admitted the use of pellet guns and injuries, media reports (here and here) said.

The governor of Jammu and Kashmir, Satya Pal Malik, “admitted use of pellet guns by security personnel during protests in the Kashmir Valley”, further adding that “forces took utmost precaution to prevent injuries”, as per a report by the news agency PTI published by various newspapers including the Business Standard on August 28, 2019.

“It's our achievement that there has been no civilian casualties so far. There were allegations that we are concealing the number of deaths but on the contrary we are sharing information even on pellet injuries. Barring one case, all pellet injuries were below the waist, only one person was hit in the neck, he is also fine and out of danger now,” The Hindu quoted the J&K governor in this August 28, 2019, report.

The Jammu and Kashmir Police are also on record stating that people were treated for pellet injuries. “There have been a few pellet injuries, they were treated,” Munir Ahmed Khan, additional director-general of police (ADGP), law and order, Kashmir, said, ANI reported on August 14, 2019.

Muneer Khan: There have been localised incidents in various parts of Srinagar & other districts, which have been contained.There have been no major injuries. There have been a few pellet injuries, they were treated. Our biggest endeavor is that no civil casualty should take place pic.twitter.com/KIAEs0gigG

At least 152 people suffered injuries from tear gas and pellets fired by the security forces in Kashmir, Reuters reported on August 23, 2019, citing data from the Sher-i-Kashmir Institute of Medical Sciences and Shri Maharaja Hari Singh Hospital between August 5 and 21, 2019.

The report said there had been protests including stone-pelting by locals, especially youths, after gatherings such as for Friday prayers, and that the security forces had fired in retaliation.

“Indian police used tear gas and pellets to fight back at least 10,000 people protesting Delhi’s withdrawal of special rights for Muslim-majority Jammu and Kashmir state in its main city of Srinagar on Friday, a police official and two witnesses said,” Reuters reported earlier on August 9, 2019.

Around 280 law and order incidents had taken place across 10 districts in the Kashmir valley, The Indian Express reported on August 31, 2019, citing an internal report of J&K Police.

At least 80 people have sustained pellet injuries in these incidents, the report said, adding that Srinagar had reported more than 160 law-and-order incidents between August 5 and 27, followed by 22 incidents in Pulwama and 18 in Baramulla.

On August 9, 2019, there were large protests in Soura, about 11 km north of Lal Chowk in Srinagar, the international media reported. The BBC released a video purportedly showing protestors trying to escape from security forces’ retaliatory fire.

Although the central government initially contested the veracity of this video as well as a similar one by Al Jazeera, fact-checking websites such as BOOM and Alt News geo-located and verified them to prove that the videos had indeed been shot in Soura and recently.

Later, on August 13, 2019, a home ministry spokesperson acknowledged the incident had taken place in Soura on August 9, 2019, stating that the “miscreants resorted to unprovoked stone-pelting against security forces, causing widespread unrest”. It “reiterated that no bullets were fired”.

Stories in media on a said incident in Soura region of #Srinagar.
On 09/08, miscreants mingled with people returning home after prayers at a local mosque. They resorted to unprovoked stone pelting against law enforcement forces to cause widespread unrest.@diprjk @JmuKmrPolice

Law enforcement authorities showed restraint and tried to maintain law & order situation. It is reiterated that no bullets have been fired in #JammuAndKashmir since the development related to #Article370@diprjk @JmuKmrPolice

A report from the ground

“There have been incidents of protests every Friday in Soura since the abrogation of Article 370,” Nivedita Niranjankumar, deputy editor-south with BOOM, who visited Srinagar from August 14-22, 2019, told FactChecker.in.

“I saw forces firing tear gas in downtown area after residents pelted stones at the forces in the afternoon of August 17,” Niranjankumar wrote in BOOM on August 25, 2019. “In most areas, stones are met with pellets and tear gas and lockdowns met with slogans.”

“While I was covering the situation on the ground with a fellow journalist, there was an incident where tear gas was fired during the protest, due to which I had a burning sensation in my eyes from the smoke it released, because of which we had to quickly move away from that area,” Niranjankumar told FactChecker.in.

Niranjankumar said she had also spoken to a 17-year-old in Srinagar, who had sustained pellet injuries during the August 9, 2019, protests in Soura. “The pellets entered my thigh and some went through to the other thigh. The doctors have said they cannot remove many of the pellets but it is to be seen how my body functions after this,” BOOM had quoted the person as saying. 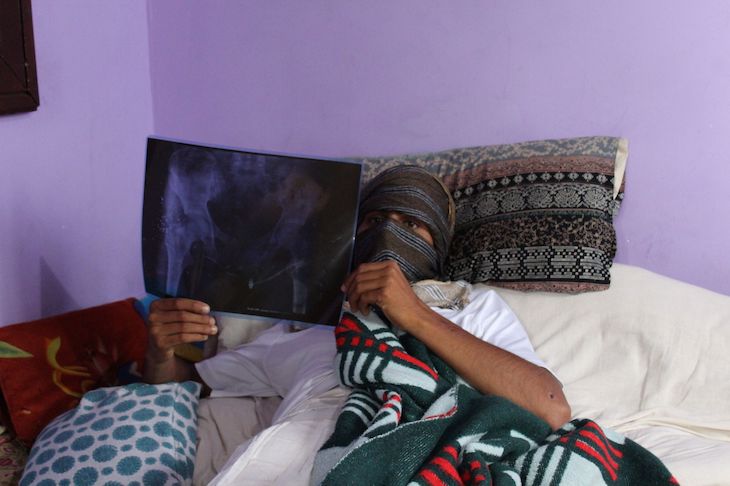 An injured teenager shows his X-Ray with signs of pellets injuries at his home in Soura, Srinagar.
Source: BOOM

On August 20, 2019, the BBC released another video, of persons allegedly injured in retaliatory action by the security forces. "I am injured right now but once I recover I will join the protests again," one of them said.

The security forces have contested this report. “The credibility of Al Jazeera is zero,” said ADGP Munir Khan, replying to a reporter’s question on Al Jazeera’s report at a joint briefing of the Indian Army and J&K Police on September 4, 2019. “The channel has been reporting wrong things right from day one. The channel has been trying to instigate violence in Kashmir right from day one. So we don't believe the channel. We have our local channels why don't they report like him [the Al Jazeera reporter],” Khan said.

“We categorically reject [Munir Khan’s] allegations and stand by the quality and accuracy of our journalism,” Al Jazeera said in a statement on September 5, 2019.

In an another incident, 17-year-old Osaib Altaf from Srinagar’s Palpora was reported to have drowned in a river while trying to escape the Central Reserve Police Force (CRPF) on August 5, 2019, in The Huffington Post on August 7, 2019. The report called him “Kashmir’s first casualty” after the abrogation of Article 370. Altaf was among some boys playing near a playground “when they were chased” away by the CRPF, the report said.

“The Union Home Ministry refused to comment or clarify on the incident,” the Hindustan Times reported on August 8, 2019. “Policemen drawn from several paramilitary forces are deployed. The CRPF is not responsible for any such incident, a senior CRPF official said.”