Jaipur: Home Minister Amit Shah has claimed that Article 370 and Article 35A of the Indian Constitution kept Jammu and Kashmir (J&K) "poor" and delayed development of the state through provisions such as those that restricted the sale of land to non-Kashmiris and reserved jobs for Kashmiri citizens.

An FactChecker.in analysis of government data, however, shows the state's development indicators to be better than the national average, from life expectancy to infant mortality, literacy and poverty. In terms of economic development, however, the state has fared poorly compared to the best performing states such as Maharashtra--its per capita gross domestic product (GDP) in 2016-17 was Rs 62,145, half of Maharashtra's Rs 133,141--though it has done significantly better than poor performers such as Bihar (per capita GDP Rs 25,950).

Where J&K has lagged is in private investment, attracting less than even Bihar, but experts differ on whether this was due to Article 370 or the uncertain security situation.

In a speech in the Lok Sabha on August 6, 2019, Shah claimed that because of Article 370, there had been no development in the state, its people had remained poor, and central government funds had been misused and not allowed to reach the people. 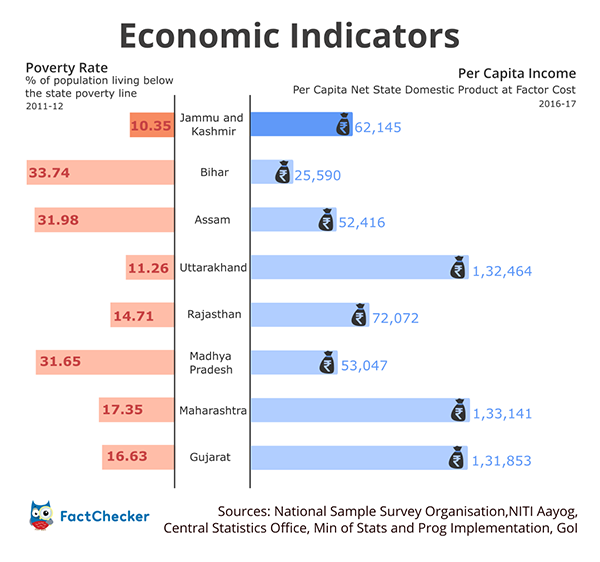 Its other social development indicators are also better or comparable to the all-India average--from life expectancy (73.5 years compared to the India average of 57 between 2012 and 2016) to infant mortality rate (23 against the India average of 33 in 2017), literacy rate (67% against India's average of 72% in 2011), government data show. 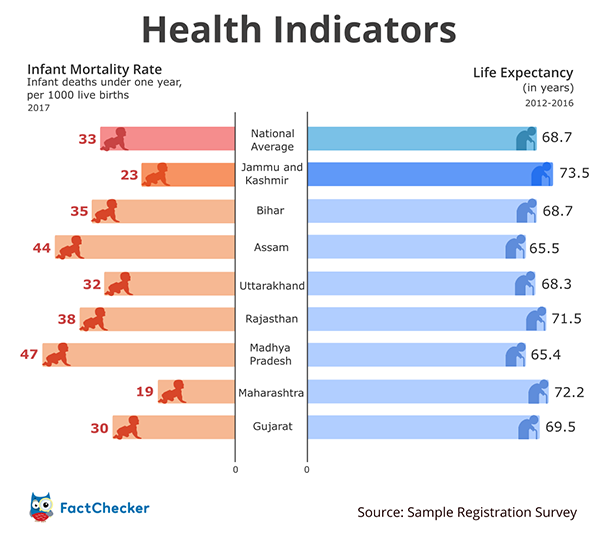 In his speech, Shah also said that the Right to Education Act that was passed for all of India in 2005 was not accepted in J&K, denying its children an essential service. In fact, J&K provides free and compulsory education up to Class 8 to all children, though its 2002 law on education lacks some of the provisions of the 2005 Act.

In 2015-16, the gross enrolment in senior secondary schools in J&K (students enrolled in Classes 11 and 12 as a proportion of all children of that age) was 58.6% compared to the Indian average of 56.6%, based on data from the Ministry of Human Resource Development. 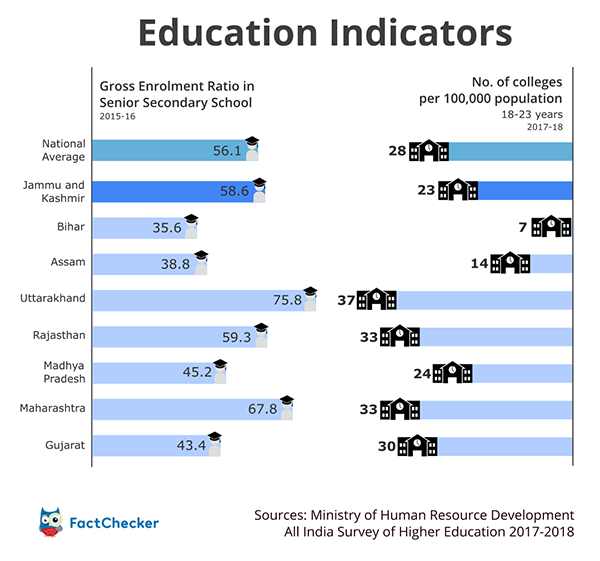 Economic growth better than Bihar but worse than Maharashtra

In terms of economic development, J&K has done better than India's laggard states though not as well as its best performers.

The state has a higher debt-to-GDP ratio--which shows what the state government owes as a proportion to its GDP than most states--49.2% compared to 32.6% in Bihar and 17.2% in Gujarat.

"The debt is in large part because of the security expenditure of the government, and debt until 1990 when 70% of the central assistance to J&K was in the form of loans," said Haseeb Drabu, an economist and a former finance minister of J&K.

In his speech in the Lok Sabha, home minister Shah claimed that more central aid had been given to J&K over the years than to other states.

The J&K government received 50% of its revenue receipts in the form of grants-in-aid from the central government in 2017-18, the latest year for which comparative data are available. In comparison, Bihar received 21% and Gujarat 12.8%, based on research on state budgets by PRS Legislative Research, a New-Delhi based think tank that tracks the Indian Parliament.

However, this was not the case, historically. "Until 1990, Jammu and Kashmir would receive 70% of the assistance from the Centre in the form of loans and only 30% as grants," Drabu said, adding that it would be inaccurate to say that J&K has received more from the government, especially as a certain amount would be for security purposes in the conflict-ridden state.

In the period from 2011 to 2019, 54% of the revenue that J&K received from the central government was in the form of grants, which is higher than what other developed states such as Maharashtra or Gujarat received, but comparable to the northeastern states such as Mizoram (61%) and Nagaland (67%), based on research on state budgets by PRS Legislative Research. 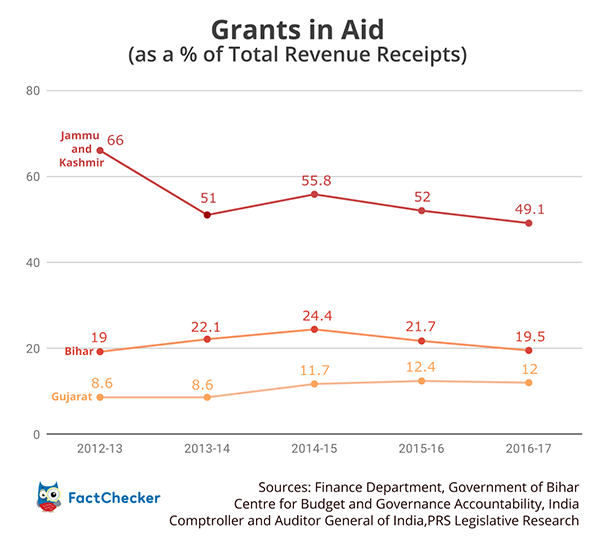 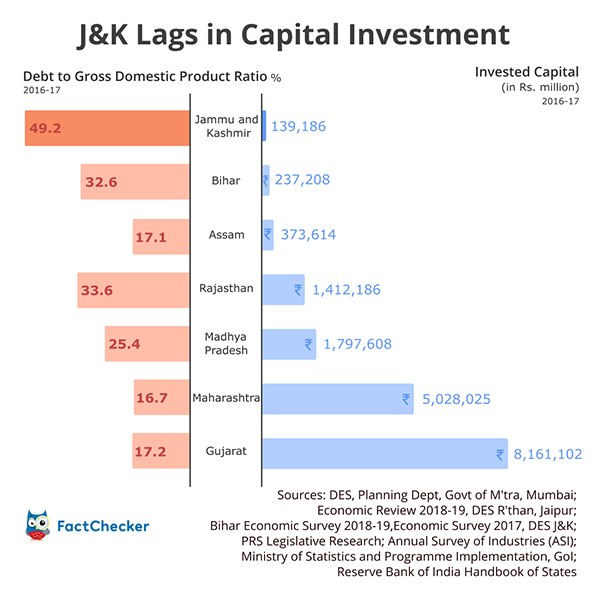 Where J&K has fared poorly is in attracting private investment, less than even Bihar.

"There is no employer in the Kashmir Valley who pays provident fund and no private employer with more than 500 formal employees; hardly fertile soil for economic vibrancy," Manish Sabharwal, chairperson of recruitment firm TeamLease, who has also worked with the government of J&K in the past, wrote in The Indian Express on August 6, 2019. "There is only one listed company and only one company with a paid-up capital of Rs 10 crore," he added. FactChecker.in could not independently verify this assertion.

"Kashmir's economic growth has not been up to its potential," Sabharwal told FactChecker.in. For instance, he said, the state's handicraft and carpet sector is underdeveloped, with little access to new designs and richer markets. "There is no wage premium in handicrafts; carpet weavers get Rs 150 a day," he said, because they have been disconnected from the rest of the country and the world. He argued that the removal of Article 370 and Article 35A would enable these workers to gain access to better wages for their work, as more companies enter the market.

Not all experts agree. "The lack of investment in J&K is because of its status as a disputed territory internationally and the security situation there," said Drabu, "Private investment runs on profitability not on national interest. There will be some photo opportunities, and MOUs will be signed over the next six months to one year, and then things will go back to usual."

Economic growth in J&K needs better infrastructure, such as better connectivity to the Kashmir Valley, more public investment in industry as "private investment follows public investment", and better governance, said Drabu The state needs to develop through ecologically sustainable industries rather than ape the kind of development in other states, he said.

"The current politicians are stale and tired and created hurdles for development in the state," Sabharwal said, adding that projects that wanted to use the industrial policy of leasing land for 99 years were mostly sabotaged by politicians, and existing leases were cancelled when the state government changed. "The state needs new local politicians who will help businesses develop," he said, expressing the hope that the amendment of Article 370 would enable this.

Doing away with Article 370 will not solve the problems of governance in the state, Drabu said. "Nobody--the Centre or the state government--has wanted to develop J&K over the last few decades," he said, adding that this is what needs to change.

(Khaitan is a writer and editor with IndiaSpend and FactChecker.in. Alfie Habershon and Jameela Ahmed provided inputs for this article.)