Delhi: Around early May 2020, the number of new COVID-19 cases every day would start reducing, and by May 16, 2020, the country would have zero new cases, according to a graph presented at a press conference on April 24, 2020, by V. K. Paul, chairperson of the COVID-19 Empowered Group 1 for medical emergency management.

“The lockdown started to have an impact starting April 4-6...case growth has started to slow and the mathematical model indicates the flattening of the curve...the lockdown has been effective. We are going to see a dip in cases in the coming days,” Paul noted.

This prediction was incorrect. India recorded 3,970 additional COVID-19 cases on May 16, bringing the total number of active cases in the country to 53,035. India reported its highest single day increase of 4,213 on May 11.

Decision of lockdown was timely, curve has begun to flatten

The nation has shown that lockdown has been effective, #SavingLives, containing #COVID19 infection and slowing down doubling rate

We need to build on these gains

“We don’t know what they did,” said Gautam Menon, professor of physics and biology at Ashoka University in Haryana, on the graph presented. “There is no epidemiological model that would predict that cases would be zero by so and so date,” he said.

India had 536 COVID-19 cases on March 24, 2020, when Prime Minister Narendra Modi announced a countrywide lockdown, one of the most stringent in the world. While the number of cases continued to grow, the doubling time gradually increased, rising from 4.8 days on March 24 to 10 days a month later. The current doubling time of cases is 14 days, the highest recorded thus far. 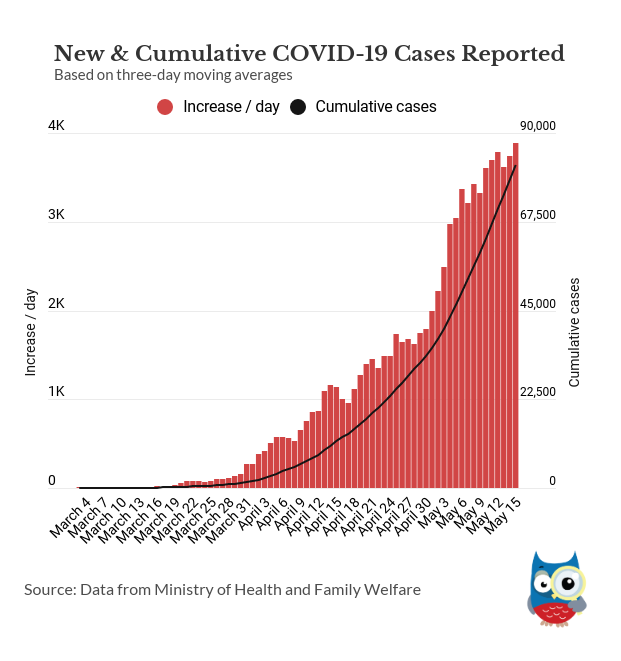 The doubling time of the cases has fluctuated over the same period, ranging from nine to 14 days. These variations could result in large differences in how fast the disease spreads, as IndiaSpend reported on May 13, 2020.

(Bharadwaj, an undergraduate at Yale University, is an intern with IndiaSpend.)