Delhi/Mumbai: In the run up to the Delhi elections on February 08, 2020, the Aam Aadmi Party (AAP) launched a ‘virtual door to door campaign’ on its achievements between 2015 and 2019. We looked at some of its health sector claims--which include free medical treatment and medicines in Delhi’s government hospitals, the number of Mohalla Clinics and services offered there, a reduction in the number of dengue cases, and the Farishte scheme to felicitate citizens who take accident victims to hospital.

Welcome @ArvindKejriwal at your doorstep!

Log in to https://t.co/NbP4aeCgV5 or give a missed call on 76909 - 44444 to welcome Arvind Kejriwal as he embarks on his virtual door to door campaign.#WelcomeKejriwal pic.twitter.com/0fpV4Y86FA

We looked at some of the claims about health. Here’s a factcheck.

Fact: Partially true. Several hospitals do have good facilities, but hospitals are overcrowded, and there are long queues for free medicines and tests. Almost half of Delhi residents still rely on private healthcare.

Kakori Sharma, 24, delivered her now three-day daughter at the hospital. The delivery, stay and treatment of her daughter, who had breathing trouble, has been free, she said, and she did not have to wait much to be admitted to the hospital.

But many patients also have to wait several hours because of overcrowding. For instance, 26-year-old Kusum, who was seven months pregnant and had been bleeding for four days, was waiting since 6 am to see a doctor, when we spoke to her at 4 pm. “We came here in an emergency" because the private hospital we were previously at charged us Rs 50-55,000 but the bleeding did not stop, she said. 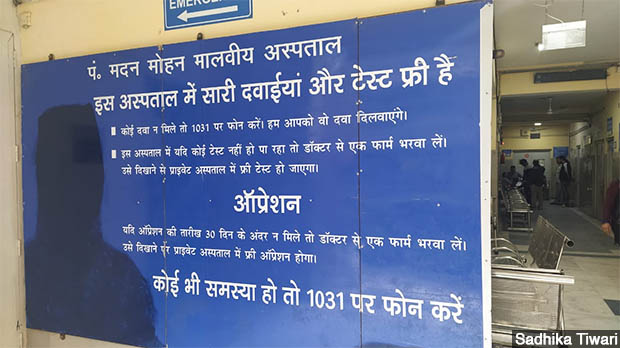 Multiple such posters in Madan Mohan Malviya Hospital promise free treatment to patients and give a helpline number for patients if their treatment is delayed.

Patients being treated are given a one-day dose of free medication in the ward but the rest of the medicines have to be taken from the dispensary or bought elsewhere, patients told us.

The pharmacy operates from 8:30 am to 3:30 pm and is shut on Sundays, except for senior citizens who can also take medicines on Sunday. Patients admitted to the hospital said it was easy to get the free medicines but some said it was more convenient to buy the medicines privately as the pharmacy closes early.

The Safdarjung hospital dispensary providing free medicines is open from 9 am to 5 pm and closes for an hour for lunch. But it is always crowded and many medicines are often out of stock, six patients told FactChecker.in on February 7, 2020.

People said it was easier to buy medicines from the shop set up under the ‘Affordable Medicines and Reliable Implants for Treatment’ (AMRIT) Retail Pharmacy scheme in Pandit Madan Mohan Malviya Hospital, which sells subsidised medicine. The queues here are shorter and more medicines are available than at the free pharmacy that keeps running out of medicines, they said.

There are long lines for tests too. Saroj Arora, a 43 year-old patient from Delhi’s Sangam Vihar had a painful lower abdomen and the doctor at Safdarjung hospital asked her to get an ultrasound. She can get this done for free at the hospital but expected a three-month wait time, based on what she had heard from other patients, so said she would get the test done at a private lab.

Of the three medicines prescribed to her, two were not available at the free pharmacy. One was available at a subsidised rate at the AMRIT pharmacy and she bought the others from outside the hospital. 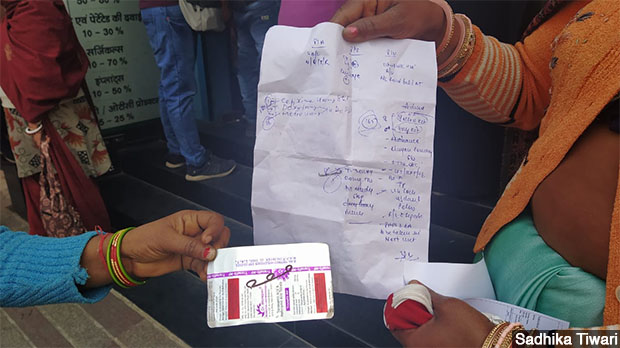 Suman Arora, 43, outside Delhi's Safdarjung hospital, showing her prescription and the medicine she had to pay for. There were two medicines on her prescription that were not available in the hospital's dispensary.

Claim: “In Delhi we have started more than 450 Mohalla (neighbourhood) Clinics. Even here all tests, medicines and treatment are free.”

Fact: Mohalla Clinics offer free check-ups, 109 free medicines, and some tests but there is no comprehensive data on the impact of the scheme, experts said, and 252 of these clinics were opened after October 2019, in the run-up to the elections.

In all, 450 such clinics have been opened. Patients at three such clinics in southern Delhi said they had benefitted, IndiaSpend reported on February 7, 2020.

“Mohalla Clinics are a good initiative when it comes to last mile connectivity for public health systems, but we cannot say anything on the working of these clinics as there is no data maintained,” Milind Mhaske, director of Praja Foundation, a nonprofit, told FactChecker.in.

As many as 41% of Delhi residents still relied completely on private healthcare services, and 12% accessed both government and private services in 2019, according to a November 2019 report by the Praja Foundation. Nevertheless, this was an improvement over 2017, when 47% of Delhi residents relied completely on private healthcare services, while 21% accessed both.

They spent 9.8% of their household income on health in 2018-19, on average, according to a report by the nonprofit Praja Foundation, published in November 2019.

If the state dispensaries and hospitals were working efficiently, then people would not have to spend from their own pockets, Mhaske said.

Claim: “Together with the people of Delhi we have controlled dengue. This is a big achievement. In 2015, when our government was formed, there were more than 15,000 dengue cases and 60 deaths. This year only 1,300 dengue cases have been reported with no deaths.”

Fact: As many as 4,155 dengue cases were reported in Delhi till November 2019, with zero deaths, data from the National Vector Borne Disease Control Programme show. This is over three times the cases claimed by the Delhi chief minister.

This decrease and the public awareness campaign are worth lauding, public health experts said, but emphasised that it is too early to say whether Delhi has defeated dengue for good, FactChecker.in reported on November 16, 2019.

Claim: “We initiated one more programme called the Farishte Scheme. Many times when a road accident takes place the victim on the road is not addressed. Under this scheme, if an accident occurs, you can take the patient to the nearest hospital, however expensive or big it might be, all treatment expenses will be given by the Delhi government. In the last one year we have saved 3,000 lives under this scheme.”

Fact: This figure of 3,000 is believable, but it is tough to comment decisively without looking at the official data, one expert said. There is no publicly available data on the scheme.

The Farishte scheme was formally launched on October 7, 2019, after a pilot in February, 2017.

This is an initiative to felicitate good samaritans who take accident victims to hospitals and save precious lives.

"We barely get anybody under the Farishta Scheme, once a month some case like that comes, it is very rare," an official at the emergency service section at Pandit Madan Mohan Malaviya Hospital told FactChecker.in.

The 3,000 figure is fairly believable, especially as it also includes acid attack and fire victims, but it is tough for us to comment decisively without looking at the official data or any RTI numbers, said Piyush Tewari, founder of Save a Life Foundation, a non-profit for traffic safety and victim care.