Rafiq Ahmad Shagu with his sons, Ayan, 9, and Mahir, 6. Fahmeeda Shagu, Rafiq’s wife died on August 9, 2019, because of inhaling tear gas, Shagu said. Hospital records show that she died of a sudden pulmonary arrest, which could be because of toxic gas inhalation.

Srinagar, Kashmir: For Mohammad Rafiq Shagu life has come to a halt since his wife died from inhaling tear gas released by security forces on the evening of August 9, 2019, in Firdous Colony, Bemina, a suburb 5 km from Srinagar, he said on September 10, in an interview to FactChecker.in.

Fahmeeda, Shagu’s wife, was at home, Shagu said, when, “[a]ll of a sudden our house was engulfed by teargas smoke and she complained of breathlessness. We immediately shifted her to the hospital. But she could not survive.”

Fahmeeda’s prescription and death certificate said she died of a sudden pulmonary arrest, which could be from inhaling toxic smoke. Her husband said it was teargas.

Since August 5, the government has “maintained peace there [in Kashmir] without any single bullet fire or a single death”, said Home Minister Amit Shah on September 17, 2019, in a speech at an event of the All India Management Association. The Home Ministry’s office confirmed to FactChecker.in that this was the official statement.

Our ground reporting shows that this claim is false. Hospital records seen by FactChecker.in confirm at least two cases of deaths, one due to inhalation of toxic smoke and the other due to metal pellets. Further, pellet guns have been used to control protests, the governor of J&K and the police have said, as we reported on September 7, 2019.

Fahmeeda Shagu’s hospital records say that she died of a sudden cardiac pulmonary arrest, which could be because of toxic gas inhalation. Her family claims it was teargas, released during a protest near the Shagus’ home on August 9, 2019.

Fearing public protests after revoking the 70-year-old Article 370 of the Indian Constitution, on August 5, 2019, which gave political autonomy to the erstwhile state of Jammu and Kashmir, the Indian government imposed a security and communication clampdown across Kashmir valley. Isolated incidents of peaceful protests and stone-pelting, like the one in Firdous Colony on August 9, continue.

As many as 152 people came to Srinagar’s Sher-i-Kashmir Institute of Medical Sciences (SKIMS) and Shri Maharaja Hari Singh Hospital (SMHS) with injuries from pellet shots and tear gas fire between August 5 and August 21, the news agency Reuters reported. At the latter, 47 patients with eye injuries because of pellet guns have been treated between August 4 and September 9, 2019, a hospital official told FactChecker.in on condition of anonymity.

For 38-year-old Shagu, his world shattered on the death of his wife, who he describes as a lively, cheerful person, and whose work at home and emotional support he depended on. “She was the pillar of my house. But I lost her so early. She was only 35 and we had started our married life just 10 years back,” he said.

Shagu, who drives a passenger cab for a living, has two children Ayan, 9, and Mahir, 6. “Both the kids are asking us why their mother died all of a sudden. Their innocent questions means more emotional trauma to us,” Shagu told FactChecker.in.

In another incident, Asrar Ahmad Khan, 18, died on September 3, 2019, after after he was hit by a teargas shell, fired when security forces were dispersing protesters in Ellahi Bagh, Srinagar on August 6, 2019, his uncle said. His house is about 100 metres away from where the protest was taking place.

“He was hit by a teargas shell when he was playing carrom at home. He was not throwing stones at the police,” Khan’s uncle, Mehraj-u-Din, told FactChecker.in.

Khan’s patient registration card, from SKIMS, said he had suffered “shell/blast/pellet injury” with “multiple pellets on head and eye”.

The Kashmir police disagree. He was hit by a stone thrown by one of the stone pelters, said Kashmir’s additional director-general of police, Munir Khan, at a press conference on September 4, 2019. 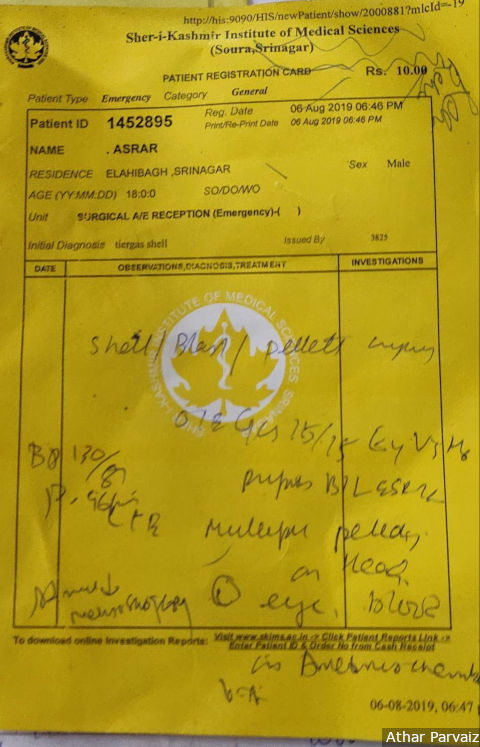 The patient registration form of Asrar Ahmad Khan, 18, who police claimed was killed by a stone thrown in a protest on August 6, 2019 in Ellahi Bagh, Srinagar. The form says he had multiple pellet injuries in his head and eye.

There are several versions of the story that have been reported in the media. In one, Khan’s family said he was on his way to the mosque, when he was stopped by security forces, as reported by The Print on September 5, 2019. In another version, Khan was playing at a ground near his house, when security forces fired a teargas shell to disperse the crowd playing in the park, as reported by The Print on September 12, 2019, and The Guardian on September 8, 2019. FactChecker.in could not independently confirm which version was true.

His family has said that Khan did not protest or throw stones, and that he was unconcerned about politics or Article 370.

(Parvaiz is an independent journalist working in Srinagar.)